The Intellectual Property Center of Sony Corporation introduced our executive coaching program in 2014. The coaching program is mainly targeted for new executive managers. In addition to handling the sudden jump in the numbers of employees and departments they have to manage, these executive managers also have to make decisions on their own and lead their organizations while delegating hands-on work to others. This is the right time when changes in their awareness and behavior are required. What kind of goals and outcomes can be expected by introducing executive coaching at such a time?

* Job title correct as of the date of the interview.

— What were your expectations of the coaching?

I had just been promoted to executive manager and my bosses told me that I was now solely responsible for overseeing my organization. They said that I needed to be conscious of the fact that my team members are always observing me, and to gain self-awareness of how I should behave to contribute to the management of the organization*. Although I belong to the IPR & Licensing Division, I hadn’t studied intellectual property rights and laws at college, so I always feel weak in this area. I was worried about how to lead a specialist team that handles intellectual property rights, what kind of messages I should deliver, and what actions I should take. Immediately after being promoted to executive manager, I was given a mission to push through a project that would significantly reform the organization both inside and outside Japan. I had a strong desire overcome these concerns and move forward. For this reason, I had an expectation that the coaching opportunity would give me a hint on how to behave and how I should change.

*To maximize the effectiveness of coaching, WAKE UP holds an alignment meeting beforehand. The meeting involves three people—the person who will receive coaching, his or her superior, and the coach—and they discuss and agree on the expectations for and the goals of coaching, thereby creating an environment that will help the coaching recipient grow.

— What did you think of the executive coaching you received?

The first thing I did was to take the LCP* assessment. While I agreed with some of the assessment results, most results tended to be completely the opposite of what I had thought myself to be. I was surprised at how I was being perceived. Frankly stating my opinions for better or worse, being an inspiring person, and placing importance on everyone being happy are some of the personal characteristics I was already aware of in myself. In contrast, suggestions such as speaking from an overall perspective, clearly and concretely communicating the organization’s goals, and not interrupting others while they are speaking, were issues that I seriously accepted as things I needed to work on. Based on these results, the coach said to me during our sessions, “Let’s work together to figure out how to expand your strengths and correct the areas requiring improvement while identifying the problem areas.”Thanks to this advice from the coach, I think I was able to gain a guide to the next step I needed to take.

— How did the sessions proceed?

The coach asked me multi-faceted questions about past events and the sense of values I held. Answering these questions helped me verify my behavioral patterns, internal thoughts, and so on. I’d always been conscious about staying pleasant and creating an atmosphere in which everyone can enjoy working. However, I knew this was not enough from now on. I was aware that the task of developing a strategic vision, converting it into specific missions, and leading the organization were the most challenging goals for me. By continuing to ask questions about how to achieve these goals during dialogues with the coach, I think I was able to get some clues. That is, if you do not have a certain talent, gather knowledge by asking for help from people who have it. To do that, I have to be able to listen to and accept other people’s opinions. This was also one of my challenges that became clear from the LCP assessment. Therefore, the first actions I decided to take were to always take a moment before answering and to pay as close attention as possible to the other person to fully comprehend what he or she is trying to communicate. I decided on these actions as a result of feedback from my coach. He said, “Your reaction speed is too fast. Isn’t it important to fully comprehend the other person’s opinion?” I realized that I had perhaps not been correctly understanding the other people’s points of view. I also hadn’t been able to think of points to meet, challenges to overcome and a proper process to figure out them. To establish these actions as habits, I wrote the actions I needed to take on a piece of paper and stuck it to the pen I use every day. Then, at the next session, I reported what I had been able to accomplish and consulted the coach about my next specific action goals. I think that having specific goals and time limits made it easier to work on issues.

I also learned listening techniques from the coach’s attitude and perspective, as well as the session atmosphere. I could strongly feel the coach’s attitude of being interested in what I was saying and who I am, which I understood to be a demonstration of active listening and not mere hearing. I felt that the ability to help conversation partners to naturally open their hearts and to establish a relationship in which people can freely talk about their feelings and opinions with anybody is an extremely important skill when leading an organization. I think I realized the effects and importance of active listening and am now able to “listen” a little better precisely because of the coaching I received.

— What effects and changes did the coaching bring?

I wanted to know how the coaching had changed me within the short period since we began, so I took the LCP assessment again at the end. The results were relatively positive, showing that my strengths had increased while the areas that needed improvement did show some improvement. I realized that working on changing my awareness and actions had produced positive results.

When you are put in a position to lead an organization, you must significantly alter your awareness and actions in the workplace. I used to take the lead in my workplace and promote work by leading our team in the way I thought was appropriate. I had considered it to be my role, and it also produced results. However, once you are put in the position of leading an organization, the number of people to be managed increases instantly and the area you have to cover also expands. The types of businesses also span many areas. If all I do is pull my team members along at the workplace, the areas I can cover will be skewed and I won’t be able to keep abreast of the overall situation. That of course will make it difficult for the overall organization to achieve good results. Instead of playing a hands-on role at the workplace, I must now move the organization more effectively by keeping a bird’s-eye view and assigning appropriate human resources to the right positions. It was a huge challenge and disconcerting for me, who had previously experienced only part of the diversified intellectual property rights operation, to manage an entire organization. However, the awareness and conscious approach to change that I learned during the coaching sessions helped me greatly when taking the first steps. I have learned to listen to others attentively and to calmly and objectively accept other people’s assertions and intent without getting reactive. As a result, I think I can now find results that take the other person’s view into consideration.

Listening to the other person until the end without interrupting. I am consciously continuing this practice, which I believe is a skill that I need to keep honing.

— What did you think about the timing at which the coaching was introduced?

I think the timing when both my work and position were drastically changing was good for me to get an ongoing positive impact on my current work. The higher you climb the corporate ladder, the harder it gets to consult others around you and you begin to feel lonely. You run into issues you have never faced before and you struggle in some cases. Under such circumstances, it is important not to lose your passion, to calmly assess your capabilities, to clearly identify what needs to be done, and to take actions in order to overcome anxiety. I think coaching can be the very catalyst that provides clues in these situations. Being able to better understand myself and gain a positive attitude toward moving in a better direction was an extremely valuable experience. I really hope our company will continue the executive coaching program. 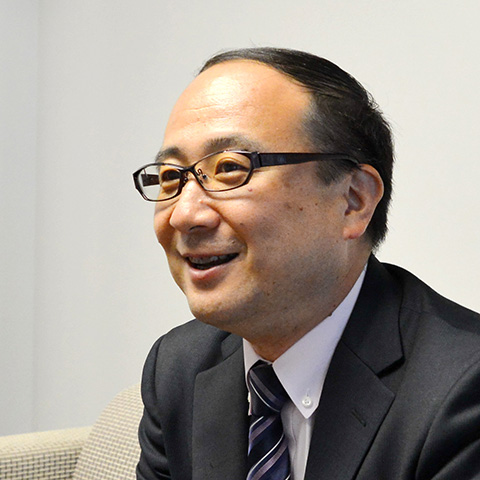 I myself received executive coaching when the policy started in 2014. At that time, as I was promoted to executive manager, the volume and quality of my work changed significantly. One hundred employees were now under my supervision and I had to work together with them. I was extremely busy until I got used to this situation, feeling always pressed for time. My honest attitude toward coaching was a feeling that just having discussions would be a waste of time.However, that attitude was completely erased as the sessions continued. The coach from WAKE UP interviewed me in detail and interpreted my past based on the LCP assessment results. As a result, I was able to reaffirm my inherent sense of values. This was the part that could be considered my essence. The fact that I was able to reaffirm my sense of values at that time turned out to be quite significant to my subsequent work.

Leaders are expected to have a clear vision and make a lot of decisions quickly. It is important not to waver from your own beliefs while trying to see the issues from other people’s points of view. For this reason, it’s better to have an open mind and a variety of viewpoints. Coaching teaches us the skills required for analyzing issues from various viewpoints and diverse angles through dialogue so we can ascertain the true essence. Those who received coaching have offered comments saying that coaching was useful in drawing out their team members’ thinking and holding discussions about better directions to be taken. Others have said that being able to change their awareness and actions has helped them to have a more positive impact on the organization. Coaching leads not only the manager to the right direction, but the entire organization. I think that is the effect of this coaching, and it is one of the main reasons we are entrusting WAKE UP to develop managers who will carry our company into the future.